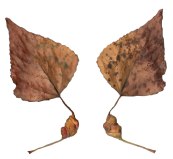 Populus niger, the Native Black Poplar, is Britain’s rarest native tree, which largely due to human interference is no longer able to propagate itself. Without co-ordinated management there is a real risk that it could become extinct.

Herefordshire has one of the best populations of these trees, however there are currently only 239 trees recorded in the county. Many of these are veteran or ancient trees and a relatively high number are pollards.

Black Poplars are dioecious – that is, there are male and female trees. Female trees are very scarce, as they have thinned out or cut down historically due to large amounts of fluffy seeds produced which were deemed a nuisance.

All the trees we have now were planted rather than naturally occurring.

Actions required to safeguard the future of Populus niger

Accurate identification of true Native Black Poplars is an essential first step, however this may not be straightforward as there are a number of hybrid forms that can be difficult to distinguish from the native tree.  We suggest the following steps to ensure accurate identification and recording:

As many of our older trees are pollards there is a risk of overgrowth and collapse of the tree if not re-pollarded at intervals – there are a number of examples of trees succumbing to this fate. This operation in itself can cause the tree to die if not undertaken by an experienced tree surgeon – again there are examples of trees being badly pollarded e.g. by contractors to power companies, which have died as a result.

The new growth which occurs following successful re-pollarding is the perfect source of material for truncheons.

Mature maiden trees have a propensity to lose a bough in strong winds, which can cause concern if the tree is in a publically accessible location. In these circumstances, a crown reduction of the tree can preserve the tree and reduce risk of injury. There is a well publicised local example of the above scenario which nearly caused the loss of an historic veteran tree due to ‘Health and Safety’ concerns, fortunately a compromise of crown reduction preserved the tree.

Populus niger is fairly easy to propagate (but see below for siting of new trees), there are two methods which can be successfully used

It is essential that truncheons and cuttings are taken from trees which have been identified as above and are on the Herefordshire list of true Native Black Poplars. Ideally cuttings should be taken from local trees to preserve any local genetics. The provenance of new plantings should be recorded, and once established as a viable tree it should be added to the local record. The county record currently includes trees once over ten years of age.

Siting of trees – P. Niger will thrive if planted in optimum conditions, but will probably fail in the wrong situation. An old name for this species is ‘Water Poplar’, which is a good clue. A wet place with a good depth of soil is ideal, a dry place will likely result in a failed tree. They are not a woodland species and will not tolerate shade or being overgrown by other trees.

A small group of Tree Wardens and volunteers have been identifying true Native Black Poplars, ensuring they are recorded on the County database, and trialling propagation methods.

To ensure the trees we have identified for propagation are true native trees, we organised a visit by the BSBI National Recorder for Black Poplars who confirmed our identifications.

We now have an identified stock of trees for propagation, including rare female trees.

We have also identified veteran pollards that require re-pollarding to a) preserve them, and b) provide a source of material for future propagation.

As a first step, we intend to propagate trees on twenty farms in the Curl Brook catchment in February / March 2018. This work will be carried out by volunteers.

Our vision is to see the planting of 1000 new Black Poplars across the County of Herefordshire over the next twenty years. This will require oversight and administration by a larger organisation e.g. Herefordshire Wildlife Trust working in collaboration with the Herefordshire Tree Warden Network.